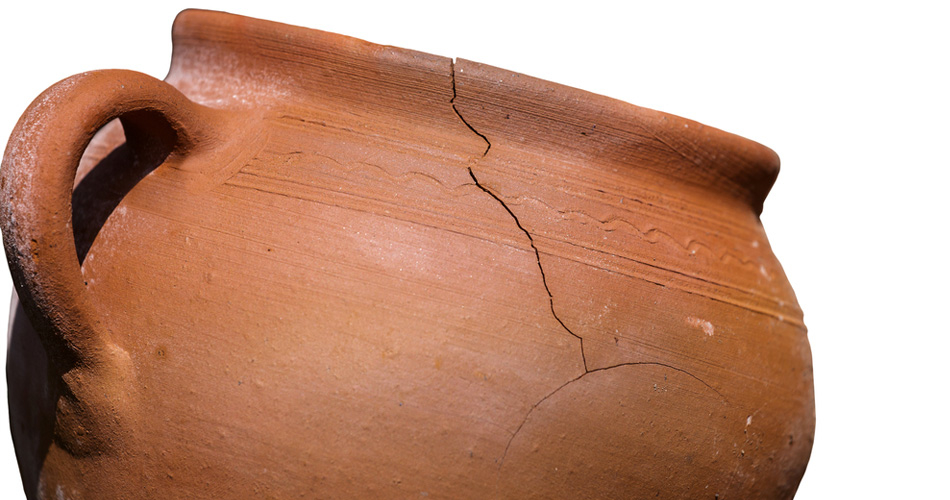 1811, The Pfaltzgraff family moved from Germany to York County. They made their living on making pottery. The most notable member was Johann George Pfaltzgraff who develop the trade and business that was handed down to two of his sons who built the first factory in 1895. The business grew and in 1960 they opened their first retail store that later grew later to 67 stores throughout the U.S. And in 2005 the family business was bought by LifeTime Brands and the 67 stores were soon closed and now rely on sales from the internet.

Pottery goes back beyond York County. It goes back to the time of the Old & New Testament time.
Therefore it should not surprise us that throughout the OT and NT we have illustrations, stories, and allegories using pottery. Many times God’s people are referred to as clay pots so I thought it would be fun to have three pots in front of us to decide which one in most likely used by God.

Let’s say we have 3 vessels before us…
1) The first one is decorative. It is pleasing to the eye, would likely complement the décor of the living room or whatever room it is placed. While it is not used to carry anything, it is on the shelf to be admired.
2) The second one is flawless but it is designed for practical purposes.
3) The third one is neither decorative nor flawless. It has a crack.

Which one of these vessels relates to you?

Which one is God most likely to use?

Are you a decorative vessel to be highly regarded for your appearance?

Are you a flawless vessel who is perfected and functional?

Or… Are you a cracked pot?

Before you identify which vessel represents you, let us admit to 4 basics.
1) God is the potter. We are the clay
In Jeremiah 18 God tells Jeremiah to arise and go down to the potter’s house. Watching the potter working with the clay, Jeremiah noticed that the shape of the clay was spoiled, deformed, was not developing to the shape that the potter had envisioned. So the instead of discarding the clay, he clumps and kneads the clay and starts over.

Isaiah 64:8 – It clearly says, God is the potter, we are the clay and that all of us are the work of His hands.

God is the supreme-being. We are merely dirt and water. We do not shape God. God shapes us. And if we ever get out of shape, God is willing to re fashion us provided that we accept His divine will even if it means repenting of our old ways.

2) God is more concerned about my heart than my color or size
It is the condition of the clay. It is not the décor nor size.

1 Sam 16:7 – When a new king was needed in Israel, Samuel was told by God to go to Jesse’s family, and not to choose someone by outward appearance but by their heart.

Hence instead of the oldest and taller and more experienced brother , the youngest and smaller and less experienced was chosen.

Why?
David had a heart for God. His clay was easy to fashion.

3) God chooses foolish and weak things of the world
In this world we applaud people who have authority, wealth, popularity, superior intelligent but God regularly chooses ordinary common people who are the least likely people to succeed.

Judges 6 – Gideon who was a wimp hiding in the wine press while thrashing wheat in the wine press so not to be seen by the enemy. When God called him to be a mighty warrior, Gideon attempted to decline. He said to God that he came from the weakest of the 12 tribes of Israel, weakest clan of the tribe, and weakest man of the clan. the runt of the litter. (If in the High School yearbook, he would be the least likely person to succeed)

After Gideon recruited an army of 32,000 soldiers, God eventually had Gideon cut it down to 10,000 and then to 300 Soldiers. When they went to battle, the enemy was confused for various reasons and ended up killing themselves.

Why?
In Judges 7:2… because he did not want Israel to take credit for the victory. He wanted the people to realize that it is not by might nor power but by the Spirit of God.

4) God Uses Cracked Pots
Many people believe that God only choses super sinless saints who have never had an evil thought, never got a speeding ticket, and always respected their parents even during Junior high. Who come from religious background. This is not true

God chooses foolish and weak things of the world.

Think about the Bible heroes. They were not perfected vessels who were flawless. Let the truth be known, they were cracked pots.

Think of them as the roll-call for “cracked-pots”!

2 Corinthians 4:7 – But we have this treasure in jars of clay to show that this all-surpassing power is from God and not from us.

—
So which one of these vessels relates to you?
Are you a decorative vessel to be highly regarded for your appearance and perfection?
Are you a flawless vessel who is totally complete and functional?
OR… Are you a cracked pot?

If we are honest with ourselves, I believe most of would say that we have been broken by circumstances, people, bad choices, by the world at large. While God fashioned us to be complete and beautiful, somehow the world and its evil influences causes all of us to eventually crack.

God puts the unbelievable, inconceivable, unthinkable, unimaginable treasure (his love and truth) inside of us and regardless of the condition of the pot, this makes us priceless. Take the time to ask God if he is calling you, if he is prompting you. When you discover what it is, say yes and realize that your brokenness, your weakness, with be your strength.

2 “Go down to the potter’s house, and there I will give you my message.”

3 So I went down to the potter’s house, and I saw him working at the wheel. 4 But the pot he was shaping from the clay was marred in his hands; so the potter formed it into another pot, shaping it as seemed best to him.

5 Then the word of the Lord came to me. 6 He said,
“Can I not do with you, Israel, as this potter does?” declares the Lord.
“Like clay in the hand of the potter, so are you in my hand, Israel.

7 But we have this treasure in jars of clay to show that this all-surpassing power is from God and not from us.